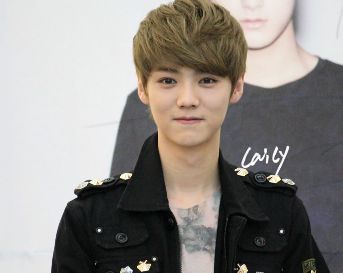 Has yet another SM Entertainment (SME) star filed a lawsuit against the company because of an invalid contract?  Breaking news out of the KPOP community is that EXO member Luhan has filed suit in Seoul Central Court.

Popular Chinese media site, Sina, claims it has exclusive information about the lawsuit which was filed just today (in Korea).

Luhan is reportedly seeking to nullify his contract with the company by getting it declared invalid.

According to reports, SM’s stock dropped more than 9% with the news that yet another artist is seeking to leave the company.  SM stock is at its lowest since Oct 2013.

Luhan isn’t even the first EXO member to file a lawsuit against SM.  Kris Wu also filed suit earlier this year for the same reason and is seeking to terminate his contract.  Allegedly, the same law firm handling Kris Wu’s lawsuit is now handling Luhan’s.

It seems SM Entertainment has been mired in controversy and engaged in embarrassing public fights with some of its biggest entertainers.  But this is not new, as you all know.

SM has gotten into deep trouble repeatedly for the authoritarian way in which it has run the careers of some massively popular artists.

Jaejoong, Junsu and Yoochun (all Korean) from the mega-group DBSK filed suit against SM and figuratively shook all of Asia.  The 3 members won court ruling after court ruling, and SM became a complete embarrassment to the international community who had no idea about the antiquated Korean entertainment system up until that point.

The list of grievances against SM included lopsided profit splits, questionable wage distributions, as well as their total control over the personal, professional and financial lives of their artists.  Not to mention the practice of assigning a manager to the artist, which naturally sets up a conflict of interest between the artist and their manager.

With SM refusing to hand over financial documents and playing hide-n-seek with the person who was supposed to testify about where Jaejoong’s, Yoochun’s and Junsu’s money went,  ultimately JYJ settled with the butt-hurt SM.  The trio started their own mega-group called JYJ.

Hangeng (Chinese member formerly of Super Junior) also filed suit against SM and won his lawsuit in 2011.  And long before either of those cases, SM and Shinhwa —  hugely popular in their time — had a public falling out.  Same goes for the group H.O.T. who was also super popular in their day.

The Korean FTC ordered that SM revise its unfair contracts with its artists as a result of the heat from JYJ’s lawsuit.

Regardless of the situation with EXO members Luhan and Kris, by all accounts this looks terrible for SM.  Some EXO fans are bluntly criticizing SM as well, with one fan exasperatingly writing  that the initials “SM” must stand for “shitty management”.

At twitter, there are expressions of shock with some fans trying to console each other.  Other fans are angry as f_ck. Sorry, no other way to say it.

magickismight tweeted: “is exo even going to survive like i’m just waiting for the members to all bee-line it outta there one by one”

exoxm90x tweeted: “Luhan, if you’re going to leave like Kris.. Please take the rest of EXO members with you and build another dream together as 12”

cahnyeol tweeted:  “i am not an exo-l and he is not my bias but damn it why am i crying like this. it hurts me in so many ways.”

sehunsbaby tweeted: “sometimes i did wish exo would leave one by one and debut together under their own company, leaving sment in pieces”

ikonbin tweeted: “losing 2 members in exo in A YEAR does not sound cool”

jshi098 wrote: “Down with kim young min! I don’t know if this is true, but still! 2014 was terrible for SM this year! Wtf is kim young min doing to these artists?”

Kim Young Min is the CURRENT CEO of SM Entertainment right now.  Kim Young Min was also the CEO that oversaw the breakup of DBSK.

beingvier tweeted: “this was a decision luhan had to make for himself. let’s just hope for a good resolution.”   And, “well idk, because SM seems to be run by a bunch of heartless buffoons”.

dontstopbelievin wrote: “I seriously can’t take another heartbreak. I am so done with SM”

KAIWolf88 tweeted: “They just debuted 2 years ago & now EXO is in a mess…. #StayStrongEXO”

Hopefully, the EXO fandom won’t have to go through what DBSK fans went through. But many people won’t be surprised if SM pulls the same mess with EXO as they did with Jaejoong, Yoochun and Junsu.

Reportedly, at least one EXO troll is already blaming “Chinese” members for “betraying” the group.

This problem is deeper than an asinine and shallow discussion about ‘betrayal’, which itself is a loaded and inappropriate word.  The problem seems to be with SM.  Period.