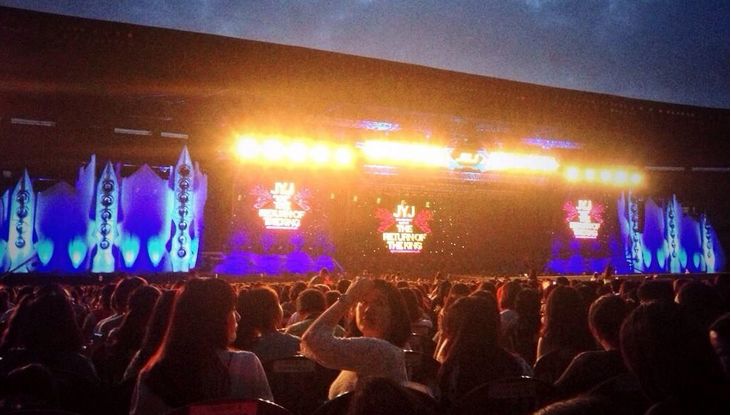 This weekend, JYJ held a special concert for tens of thousands of fans in Seoul.  The  “Return of the King” concert — which sold out in 15 minutes when tickets initially went on sale– is in support of their new JYJ album, which caught fire all over the world the second it was released.

The outdoor stadium concert was reportedly a beautiful affair, as many fans were tweeting about everything, including the color of the black and red shimmering microphones.

And apparently even the insects were loving JYJ as some fans report “thousands of insects” (moths or otherwise) at one point swarmed the stage to the point where some fans initially mistook them as the “dreamy illusion” of confetti paper. LOL!

I guess those little critters were super excited to see JYJ performing together too!

Many fans commented on the “perfect harmony” of the three.  ohmyjunsu tweeted: “Their harmony… they’ve still got it.“  While rubypurple_fan tweeted “Our worries were groundless… Their harmony is amazing!”

Attendees also couldn’t resist giving excited reports about what the members were wearing… or NOT wearing in the case of Jaejoong who had fans drooling over his shirtless, tattooed chest

Each member had their own segment of the concert as well where they performed some of their most popular solo songs (Junsu: Incredible, etc; Yoochun: I Love You, etc; Jaejoong: Butterfly, etc.)

And the three also performed songs from their previous album like “Be My Girl” , “Mission” and “In Heaven”.  The gold glitter confetti during “In Heaven” was of particular note.

When it came time to perform “Back Seat”, there was a little chatter between the guys before the performance.  Here’s a fan-provided rough draft of what they said about the song posted by  “The_Little_Pear”:

Jaejoong: “It has been a long time that we come back with a full-length album. When I watched our teaser, I felt like we were debuting as rookie again. We 3 are still young. We felt very fresh. But our song is banned.”

Junsu: “Well, it should be banned by at least 1 broadcaster.” (Laugh)

Junsu: “Tbh, although our song is banned… Well… Even it wasn’t banned, we still couldn’t appear on TV anyway…”

Yoochun: “Above all, because we can’t appear on TV, it’s very special to be able to see you on concert stage like this.”

JYJ: “Let’s think about this positively… positively. We can’t meet [anywhere] other than this stage.”

The official video for the first single, Back Seat,  was just released on Youtube at the end of July and already has more than 5.9 Million views.
{youtube}3TyKyeS3P-Q{/youtube}

When the video first came out, there was talk about it being too suggestive (yeah right), hence the “banned” thing.  The problem with this “ban” is that it only works when the artist you’re trying to ban is actually part of the system.

Since JYJ has essentially been blacklisted from performing on entertainment shows because they stood up to their old management agency, the “ban” is  worthless.  That’s why Junsu reportedly said that they couldn’t appear on TV anyway.

JYJ will continue to promote their album while Yoochun is set to make his movie debut with Sea Fog scheduled for August 13(14) 2014.