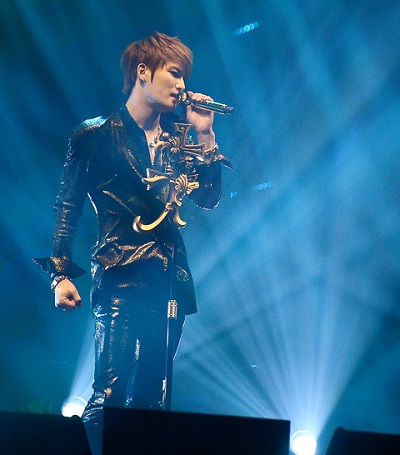 According to Wikikpop.com, Jaejoong (JYJ) wrote a letter to fans which was released after he officially enlisted for compulsory service in the South Korean military.

The singer/songwriter/actor joked about having bigger cheeks from eating well and drinking while working on music and other upcoming surprised for the fans.

Jaejoong also stated that “our second regular album will be released”, possibly referring to a new album project that JYJ has been working on which is set to be released during the period of his enlistment.

Read the full translated letter here (any typos are not from dongbanger.com):

-I’ve gained 4kg. Look at my fat cheek. I eat well these days. There’s an old saying that if you eat well, you look good even if you die. Haha!

-It feels great to see those of you who shout out my name loudly. That makes me believe that I’m a successful singer.

-I’m entering the army now. Although it is a belated enlistment, I spent my 20s with you and made memorable time. Thanks to that time, I could be here with you. If I spent my 20s in the army, your waiting would be long. And you know we had some restrictions on tv.

-It’s a bit sad. I’m so good now. I can be on TV, and start appearing on the show little by little. And our situation is getting better. However, I have to leave you now. Oh well, it’s about time to take a break anyway.

-Our love has become deeper, and our hearts have been strengthened. I thought I would never cry, but I burst out in tears during my concert in Japan. My heart won’t listen to me. Today, I’m not going to cry. If I cry, our strength which we’ve been building will just destroy. We’ve been fighting with something big, right?

-Am I lucky? I have a friend at a boot camp and he is an instructor. He calls me ‘Training soldier Kim Jae-joong’. He says that no matter how short I cut my hair, he’ll cut your hair even shorter. He teased me not to cut my hair off.

-I heard that when we have a good time, our parting feels even more sorrow. If we didn’t have good time, you would be like, ‘Ok, just go. We will become a fan of other idols.”

-But be honest, there isn’t an idol like JYJ. Most of the idols get embroiled in romantic scandal and marriage scandal when they turn 30. They gain weight, and cut their hair short with no styling at all. But we are not like them. We take good care of ourselves…and I gain weight when I eat too much. Haha!

-Let me make it clearly. I might hear some bad things from others, but I don’t care about them knowing that you will be pleased to hear this. After I enlist the army, our second regular album will be released. I’ve prepared a lot and you won’t barely feel that I’m away. I told you. I drank and recorded songs everyday. But they turned out good. Ha..I must be fainting by now…but a human is amazing.

-One more thing, while I’m in the army, I’ll visit your through concert. You think that’s impossible? I’ll do that. You are curious already. I’ve prepared many things. It was tough. You’ll have time to see me. Time flies by you know.

But when I’m away, it will feel long. Stay healthy you guys.