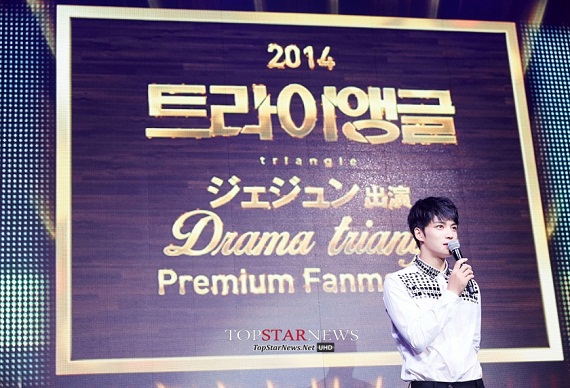 There was a fanmeeting for Jaejoong in celebration of the Korean drama ‘Triangle’ on June 22.  According to reports, some 2,000 fans alone came from Japan to Korea just for the event.  Triangle tells the story of 3 brothers separated during childhood where each of them ends up in totally different circumstances.  Jaejoong’s character, Young Dal  Heo, becomes a street thug and generally all around hated guy.

The drama has benefited from the maturity of Jaejoong’s acting skills, as his comfort and ability to express himself has improved with every drama he’s in.

At the fanmeeting, Jaejoong reportedly said it was tough for him to speak roughly (like a thug) because that’s not how he normally speaks.  He also said what he had his character have in common is their passion to achieve their goals.

When asked for the differences between he and his character, Jaejoong jokingly said he doesn’t look through other people’s wallets in a motel room.  This is in reference to a scene in the first episode.

As part of the fanmeeting, Yoochun (JYJ) sent a video message congratulating him.  In his message, Yoochun joked that in the money scene — where Jaejoong’s character throws the money up into the air while laughing — Jaejoong wasn’t acting at all. LOL!  Jaejoong said it’s human instinct to feel great when you have that much money.

There was even a cute little “fortune” teller as part of the fanmeeting.  According to the fans in attendance, the Tarot reader told Jaejoong that a non-celebrity person suits him best and to wait 2-3 years to get married or else it will be really stressful.

The fortune teller told Jaejoong that he will have two children, that his first child will be a son, and that his 2nd child will be famous and give him a headache (ie. make him worry).  Then Jaejoong joked that he didn’t want to have kids anymore. LOL!

For the fans he sang ‘But I’ from the drama’s soundtrack and had various interactions with them.

He really knocked it out of the park with this drama and  the rights to broadcast it in other countries has been sold to Japan, Thailand, China and other countries.

Seems like a great time was had by all.