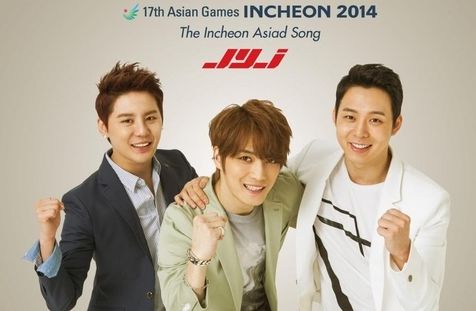 After pulling the same sh!t on JYJ as other cowardly Korean organizations and entertainment shows, the Incheon Asian Games Organizing Committee (IAGOC) has come under massive fire by outraged international fans of the supergroup.

The South Korean based group JYJ has been bravely fighting against an asinine, childish, backwoods vendetta towards them for speaking the truth about the antiquated, slavish Korean entertainment system.
The group has already won mult

iple legal battles against SM (Korea) and their associated company avex (Japan).  But it seems the price of those multiple wins is to be thrown into ridiculous situations by weak-ass individuals who only seek to use JYJ’s international notoriety and broad fanbase to gain attention for their events, while not allowing JYJ to benefit from their own hard work.

JYJ was chosen to be the official honorary ambassadors of the Asian games which is a role meant to bring both domestic and international attention to the events currently scheduled to be held in September 2014.

JYJ has already recorded the official theme song for the Incheon games, and were part of showcases in Vietnam and China to raise the international profile of the games.  The official video for the song “Only One” has over 1.6 million hits at Youtube.
{youtube}w9_NQoLXacw{/youtube}

However, it has come to light in recent weeks that the organizing committee might be refusing to uphold their end of the contract by allowing JYJ to perform during the opening and closing ceremonies.

Last month, CJeS — the company working with JYJ — told the organizing committee that JYJ will perform at the opening and closing ceremonies as well as take part in press conferences for both events.  But apparently the committee either lied to CJeS or refused to send them information about the events.  Or both.

In the next breath, the committee was advertising to the press about the stars who were going to perform at the opening and closing ceremonies, but didn’t mention a damn thing about JYJ.

From the translation of the official statement from CJeS:
“For more than a year, the committee has made over four billion Asians believe that JYJ is the face of the 2014 Incheon Asian Games, yet they did not bother to mention the name JYJ at the press conference. This goes against common sense.”

After using these three young men for months and months to promote their event, JYJ apparently will not be allowed to perform the official song of the Incheon Asian Games at the ceremonies

In fact, the admin at dongbanger.com had no idea this event even existed until JYJ began promoting it.  The event was put on the radars of many international fans because of JYJ’s involvement.

Contacting the participating vendors and putting pressure on advertisers may come in the wake of this debacle.

Thus, it’s no surprise that almost over 17,000 people (16,928… 16,964… 17,076… and counting) have already signed a petition started at Change.org calling for an investigation into the IAGOC.  The petition is asking for the Olympic Council of Asia to investigate the IAGOC’s actions.

Fans from all over the world have signed the petition already, including but not limited to fans in Brazil, Japan, Great Britain, Philippines, Kenya, China,  Portugal, Germany, Indonesia, Russia, Canada, Romania, France, Malaysia, Saudi Arabia and the United States

According to the petition, new questions are being raised about the fairness of the games (competitions) themselves if someone can allegedly so easily manipulate the organization by becoming a sponsor or making a corporate donation.

From the petition:
“The actions of the IAGOC have drawn worldwide criticism from spectators to journalists, tarnishing the reputation of the Asian Games and bringing concern regarding whether or not the IAGOC is capable of holding a fair competition for athletes who have trained all their lives for this one stage.

If a mere corporate donation caused the IAGOC to drop their honorary ambassadors in such a disgraceful and public manner, we, the spectators and consumers of the Incheon Asian Games, cannot trust them to conduct fair play for athletes during the Games.”

If these people can’t be straight with a simple issue like honoring their commitment and obligations to allow JYJ to sing at the opening and closing ceremonies, just how susceptible are they to other types of corruption with a bigger payoff for those involved?

What’s worse is according to reports, the IAGOC announced that a boyband from SM Entertainment– the very management company JYJ outed for their slave contracts and unfair business practices — will be performing at the opening and closing ceremonies.  The SM Entertainment (SME) boyband will also appear at the press conference instead of JYJ.

Of course fans are going ballistic. With the replacement of JYJ by a group owned managed by SME, observers began speculating whether or not SM Entertainment had a hand in using their power to vindictively snatch this opportunity away from JYJ.

It’s true that SME’s reputation (what’s left of it) was horribly damaged starting in 2009 after contract details and ridiculous business practices came to the public’s attention when Junsu, Yoochun and Jaejoong filed a lawsuit in Korean court to get rid of a crushing exclusivity contract between themselves and SME.

SME was investigated by the Korean FTC, who then ordered it to change its unfair contracts with its artists.  JYJ later settled the lawsuit after they won a number of court rulings against SME.  With the lawsuit over, companies could no longer use the “ongoing lawsuit” as an excuse to keep JYJ off of their entertainment shows, right?

But some 5 years later, SM Entertainment is still seen by some as having a hand in trying to block JYJ’s continued rise, and no entertainment show will let JYJ on the air allegedly for fear of getting on SME’s bad side.

All that’s required to deal with such nonsense is for an organization (like the IAGOC) to grow some balls and say ‘no’ to outside pressure from businessmen who fancy themselves part of a hierarchical age-based scheme meant to rule over younger artists who fight against their antiquated, slavish old-Hollywood type of system.

Too complicated?  Well, all the IAGOC has to do is honor the f_cking agreement they made with JYJ before they used the group to gain more international attention for their event.

What the IAGOC has now pulled with JYJ is the same unorganized and disappointing nonsense as what the committee handling the ‘Jeju Island New 7 Wonders of the World’ did.  That event turned into a hot mess after the organization allegedly replaced JYJ with a group from SM Entertainment.  Sound familiar?

Korean fans revolted and some international fans looked down on that organization’s ability to handle their business in an upright manner.

This time, CJeS made it known upfront with the Incheon Asian Games organization that JYJ would agree to be part of these events — including becoming the official ambassadors — only if JYJ DIDN’T have to go through being disappointed like that again.

But apparently the IAGOC has turned its back on the group only seconds before the finish line, and may be repeating the same pattern as other Korean entities who are too afraid to stand up for principles.

Fans are outraged about the situation and find it another affront against JYJ for speaking the truth.

As a result, Dongbanger.com will not be posting any data (scores, schedules, etc), nor spreading any information about any scheduled events, nor doing any writeups about any specific advertisers’/vendors’ support for the Incheon Asian Games in the foreseeable future.