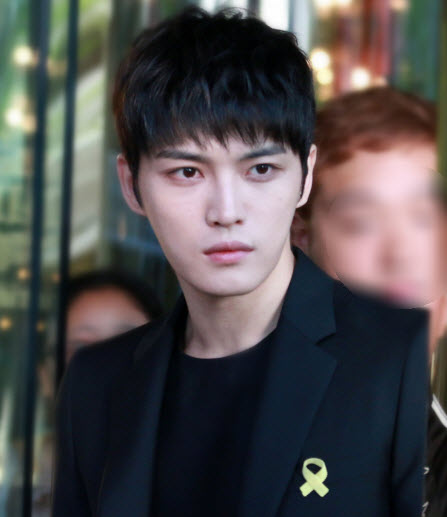 As if we needed a reminder, singer/songwriter/actor Jaejoong spoke about how later this year he has to enlist in the military to serve his mandatory 2 years of service like every other healthy male South Korean citizen.

Jaejoong and Triangle cast members were at a press conference to promote the new drama April 30 (Seoul, South Korea time). South Korea is still reeling from the ferry boat tragedy, so the cast was dressed in all black wearing yellow ribbon pins to show respect.

The exact time and area of deployment is yet to be finalized though, but he and group members Junsu and Yoochun (JYJ) all plan to release another project before Jaejoong is set to enlist.
Jaejoong: “The time has come for me to go to the army. I could adjust my enlistment anytime if I’m doing solo activities but I’m with JYJ so there are still a lot of things that I have to consider…

For now, I can say that fans can expect a JYJ comeback by the second half of the year. I think I can finish that and then go to the army.”

He also talked about the new MBC drama he is shooting which is set to begin airing May 5. It will air Mondays and Tuesdays.

Jaejoong will play Young Dal, one of 3 brothers who are separated after a tragedy. He lives a very tough life and eventually becomes the boss of a gang (LOL!*) while living off “collecting private loans in Jeongseon, Kangwon-do”. (*see an upcoming blog post)

Of his character, Jaejoong said:
“My character is a gangster, who lives in Sabuk in Gangwon province. He keeps his desires and ambitions. He will start to change after meeting his brothers and Baek Jin-hee…

I’ve played cool roles so far like a directing manager or a military officer. But it was hard for me to know about the character as I have never lived like that. I actually feel that I act like ‘Heo Young-dal’ in my daily lives, except the things the character has to do. I like my role as he is more humane than other roles that I played.”

It is unfortunate that JYJ continues to be blacklisted by cowardly producers and entertainment broadcasters who are still– even after JYJ prevailed in court over their former slavemasters agency — refusing to allow the 3 members onto entertainment shows in Korea to promote their projects.

When asked if he feels bad that he can’t sing on music programs, he replied, “Of course I feel bad about it. I don’t think there’s any artist who wants to have his activities while hiding himself.”

Let’s just hope that in the 2 years he’s serving in the military, the antiquated, backwards and embarrassing Korean entertainment system will have evolved.

Here is the translation of Jaejoong at the press conference:

A. I’ve watched him acting since I was young. I admire him. I feel grateful to work with him again. I always think that I should become an actor like him.

Q. You are planning to join the military in the second half of the year. Will this be your last drama before that?

A. I think so. I’m not sure about the exact date. But I think JYJ will still perform until in the second half. We should wrap it up first.

Q. Why did you choose ‘Triangle’?

A. I wanted to join after reading the script. I just loved it. Like Yim Si-wan, I’ve been on many dramas. So I always wanted to try various roles. I like my humane character in the new drama.

Q. You faced so many hardships in the highlight videos.

A. He looks cool in some scenes. But he mostly faces so many hardships like being covered with coal. I feel sorry for him. But I’ll do my best to express him as naturally as possible. The more I shoot, the better I understand about the character ‘Young-dal’.

Q. Don’t you feel pressured comparing to your former drama?

A. I try to do my best and enjoy working. (Laughter)

Q. Can you tell me more about the action scenes with Yoshihiro Akiyama (Chu Sung-hoon)?

A. I’ve never watched ‘The Return of Superman’. But I only knew about him as a friend of mine in Japan knows him. I talked to him in Japanese cause I thought it would be easier for him but he was really good at Korean. I only got hit by him. When we talked, I felt he is against his manly image shown on TV but he is very nice and calm. I was very surprised by that.

Q. Before enlistment, You can’t appear on music programs & variety shows, what do you think about that?

A. “I don’t think there is any artist who wants to hide himself from the public.” (via @The_Little_Pear)