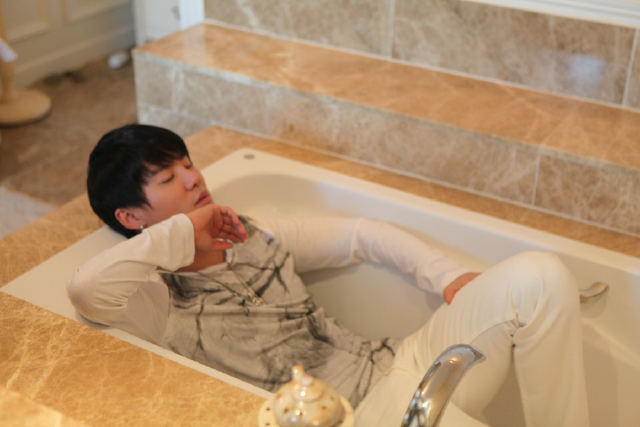 Update: LOEN is announcing that they will steam Junsu’s showcase on LOEN TV and MelOn TV, according to late reports. cJeS released a statement saying the issues with LOEN have been resolved. The report below was written before this latest information and will remain in tact for archival purposes.

Yet another company, LOEN, has stepped into dangerous territory by trying to screw over a member of JYJ.  You would think LOEN paid attention to the wretched backlash against SM, KBS and avex (Japan) for their questionable behavior.  But no.

LOEN is a music and entertainment distribution company which is in control of “MelOn”. MelOn is the most utilized online music sales site in all of South Korea, currently.

cJeS, the company working with/for JYJ, was in negotiations with LOEN about a distribution and promotion deal for Junsu’s upcoming 2nd solo project.

In fact, according to cJeS, it was LOEN who suggested Junsu do a showcase to be broadcast via MelOn in the first place.  This, of course, was expected to garner enormous amounts of traffic for MelOn.

LOEN also asked cJes to make sure they promoted LOEN and MelOn in their press releases about the upcoming Junsu album and showcase. cJes agreed to LOEN’s suggestions.

However, only 6 days before Junsu’s album release, LOEN unilaterally changed the terms of the deal.  LOEN now says they will not be live streaming any content, nor will they be doing any promotional marketing for Junsu’s album.

LOEN claims the decision was made by their “internal executive team”.  In other words, somebody with connections to the big bosses called in a favor and wrecked this deal.

Further, since cJes was working on this deal with LOEN, they were not in talks with other companies to do it, which leaves them in a predicament.

According to translated reports, cJes says, “We are unable to proceed with other contracts with favorable terms. They have cornered us and used their power unjustly on us.”

CJeS released a statement on this situation which partially reads:

“We can clearly say that we have constantly been faced with invisible external pressures directed at JYJ and will not sign any agreement even with the tyranny of the power distributor.

The aforementioned has maliciously used their advantageous position as a distribution business and unilaterally annulled a business to business consultation. We will file a civil complaint against LOEN with the Fair Trade Commission and Anti-Corruption & Civil Rights Commission. We will do everything in our power to seek justice. …”

CJeS also said that if LOEN refuses to livestream Junsu’s showcase on MelOn, cJeS will live stream it themselves.

What’s clear at this point is that LODOWN LOEN pulled the rug from under this deal at the last minute.

LOEN released a statement claiming that nothing was finalized yet and that they were still negotiating…. 6 DAYS before the showcase…. after 2 months of negotiations. Yeah, right.

Add LOEN to the list of companies whose introduction to international fans has turned out to be a negative one.  Many international JYJ fans didn’t really know who LOEN was before this current incident.

Many international fans’ first impressions of KBS, Channel A, Dispatch, SM and avex was a negative one as well.

Fans in North America, South America, Europe, etc. learned all about these companies because of the disgraceful way in which they treated JYJ for speaking out.

CJeS has repeatedly talked about trying to establish deals on JYJ’s behalf only to have those deals sabotaged by higher-ups at the last minute.  They would engage in negotiations with some company or broadcast people, then someone would get wind of their plans and that company would mysteriously come up with a lame reason for stopping the deal.

This latest LOEN situation further proves JYJ’s and cJeS’s contention that they are being unfairly targeted because they decided to fight against the totalitarian entertainment system in South Korea.

__JYJ’s Success is SM’s failure__
JYJ’s success after leaving SM continues to spook the hell out of companies who want to maintain total control over their remaining artists.

Any major deals that JYJ creates and maintains will be taken as proof an artist can be massively successful in Asia without needing to be under the full control of a big entertainment company.

JYJ came up in a system where the entertainment company (SM Entertainment) controlled everything for the artist: money, promotions, whether or not they appeared on television, where they lived, how long they slept, their schedules, who they were seen in public with, etc., etc., etc.

Whatever they wanted to do with the little money they were paid needed the approval of SM (note the CreBeau incident).  JYJ couldn’t even invest in the company’s they chose without SM’s approval.

SM even assigned a manager to the artist, thereby making the manager an employee of the same company the artist is seeking to do business with.  That’s a total conflict of interest and ensures the artist is at a disadvantage.

When JYJ won big lawsuits against SM (SM Entertainment) in Korea AND avex in Japan, it sent shockwaves through an industry still run by older, crotchety men and their antiquated ways of controlling every aspect of their artist’s personal and professional lives.

Both SM and avex had horrible PR for their actions.  Just last year SM had a big drop in business profits and sought to blame TVXQ’s expenses for it (4).

KBS had terrible PR over their decision to keep JYJ from performing at the New 7 Wonders of the World concert which would’ve promoted Jeju Island for inclusion on the list.  Even a Korean senator publicly blasted KBS for causing all that negative publicity.

And avex (Japan) behaved shamefully and engaged in all kinds of foolishness, including trying to stop JYJ from performing at a charity concert to benefit victims of the massive earthquake and tsumani in Japan.

Even though JYJ won these lawsuits, there are still some people in high places who want revenge because the 3 members essentially blew the lid off a South Korean entertainment industry which deserved public scrutiny and international criticism.

Changes were made to contracts for entertainers and new trainees still under the South Korean system because of JYJ’s fight for fair treatment.  So any amount of success JYJ has is intolerable for some people who prosper under the current system.

At the very least, LOEN needs to learn real quick from the mistakes of KBS, at the very least.  That station is persona non grata for a lot of international fans.

Honestly, I never even heard of LOEN before this latest blow up with JYJ, so for me — and for a lot of international fans — the company is looking shady as hell right now.  Having unnamed executives pulling strings and wrecking deals doesn’t put my mind at ease at all.

Even with this latest LOEN nonsense, Junsu sold out 18,000 tickets for a concert in 15 minutes.  His 2nd solo album, Incredible, is scheduled for release July 15.

Oops.  Looks like the only thing LOEN did was put a spotlight on Junsu’s latest project and opened Junsu’s showcase up to all fans instead of just the ones who were members of MelOn.