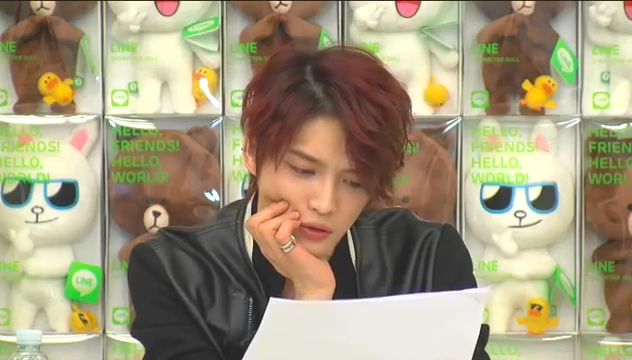 510,000 fans from all over the world participated in the LINE chat with Jaejoong on March 11 (KST).  LINE is a Naver app (for Smartphones, PC and Mac) which lets people communicate with each other.

There were 50,000 comments in real time and 20,000 applicants to be chosen to meet Jaejoong in real life.  Fans from 32 countries participated in the event.

500,000 fans participated in the event of drawing a picture with the characteristics of their specific countries onto Jaejoong’s photo.

Using LINE is a way for the artists to get directly to the fans via a familiar platform.

But how did this idea come about?  JYJ, of which Jaejoong is a member, has had to deal with punk-a$s cowards who control the Korean broadcasting stations.  Those people are afraid to allow any member of JYJ on their entertainment shows for fear of retaliation from JYJ’s former agency, SM Entertainment.

JYJ sued the once-powerful agency for unfair business practices (and slave like profit-splits) and won their freedom.  The process took years and JYJ’s had to deal with all types of

During this process, JYJ has had to be creative about how they reach out to their fans.  And one of those ways is LINE.  Its a direct ‘LINE’ to their fans. Get it?

Again, JYJ’s innovative approach of reaching out to their fans have put them on another level.  The success of this event is sure to draw the attention from many who will copy this event as a way to reach out to the public.