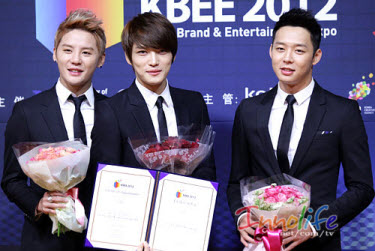 Guess who got a special honor by receiving the Commendation of the Minister award during the opening ceremonies of KBEE 2012 Korea Brand & Entertainment Expo? JYJ, of course.

JYJ received the honor because they were designated to have the most influence on culture among all the Korean Entertainment stars.  Take that, antiquated KPOP industry!

The guy flew to Osaka, Japan to attend the opening ceremony which was also heavily attended by reps from governmental agencies like the Ministry of Culture, Sports and Tourism and the Ministry of Knowledge and Economy, according to translated reports.

“We were happy to learn through our concert and fan exhibition that there were many who loved our music and Korea. We’ll accept this award and repay our fans with a better image,” the members are reported to have said in response to the honor.

JYJ made their home country of South Korea uncover their eyes and take notice of the massive successes they achieved by becoming the first Korean solo artists to perform in the South American countries of Chile and Peru.  Another achievement was the over 7000 Japanese fans who flew to South Korea to see JYJ’s EXPO over the course of just a few days.

The agency working for JYJ, CJeS Entertainment, released the following:
“JYJ’s achievements aren’t only limited to Asia, where they are able to earn much profit, but also such locations as South America and Europe where there hasn’t been much promotion. The award was given in order to recognize that. We heard the group hasn’t been active in Japan recently, but still thousands of fans gathered at the airport although it was the group’s first visit to Osaka in three years, and confirmed its popularity hadn’t waned.”

Jaejoong is making his film debut in The Jackal is Coming, after getting high marks for his performance in the Korean drama Timeslip Dr. Jin.   He actually shot both drama and movie during the same time period.

Junsu is catching the eye of the international world with his solo tour in North America, South America, Europe, and Asia. Last month, Junsu won the “Male Excellence Award” at the Korean Musical Awards for his role in the musical “Elizabeth”.

Yoochun is current starring in the Korean drama I Miss You with ‘Go Eun Chan’.  Sorry, I couldn’t resist!   He’s staring in the drama with Yoon Eun Hye of ‘Coffee Prince’, ‘Lie to Me’ and ‘Goong’ fame.  Yoochun is also the golden boy of the commercial world as well with endorsements for all kinds of products.