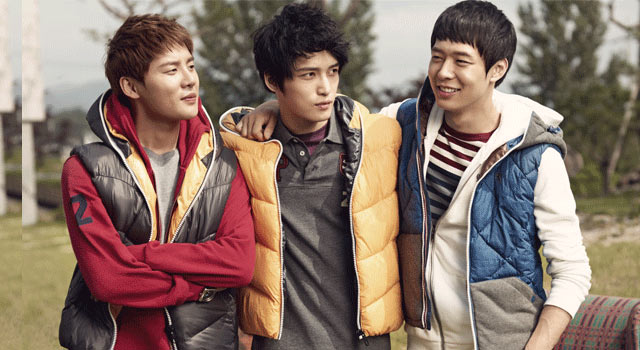 The album sales are through the roof — 350,000 copies and counting — despite the trio not having the chance to promote the album on any of the countless television or radio shows in Korea or Japan.

Maybe KBS didn’t think JYJ would be able to produce a full album by themselves?  Or maybe KBS’s words were thrown out solely to get themselves out of their last controversy regarding JYJ.  Its possible that KBS has no intention whatsoever under any circumstances to allow JYJ to promote on KBS shows.

__No Justice, No Peace__
JYJ’s reps have responded to KBS’s flip-flop.  Part of their statement on this issue is as follows:

…We have repeatedly informed you of this. JYJ is engaged in a civil lawsuit that re-establishes the human rights of artists with regards to unconscionable/unfair contracts. The court has twice issued the decision that one must ‘guarantee JYJ’s entertainment activities during the duration of the lawsuit

If KBS will adhere to this official position, then it shall need to present evidence that it is deciding with the same standard for all entertainers who currently appear on broadcast when deciding whether s/he can appear.

KBS has replaced JYJ with SM artists in Jeju, banned a JYJ song by claiming it contains a slur against former SM head Lee Soo Man, and refused JYJ appearances because of a lawsuit against SM.  All of this is way too coincidental for there to be no relation.

Many feel its a legitimate question to ask if any secret side-deals and promises have been made between KBS and SM to keep JYJ off the air.  The tie is too strong to be coincidental.

Needless to say, the Twitterverse is lit-up with rebuffs against the broadcaster.

kresjejung posted, “…People who surrender to their fear are cowards ~~> KBS & SME!!! JYJ will rock MusicBank.”

WithLaney posted: “SMH @ KBS & all their bull[bleep]!  At least have the balls to come out & tell the truth.  You’re blocking JYJ because you’re kissing SME’s ass!”

KingBeaArthur wrote: “I’m about to [f_ing] march on KBS & start some [bleep].  Their reasoning for JYJ’s barring is [f_ing] ridiculous.”

This poster later also commented about SME saying, “BTW, I refuse to support anything SM related due to their continued underhanded bull[bleep] against JYJ.”

Amasianbelle mentioned JYJ’s success despite the circumstances, posting: “Though I hate all that, JYJ seems to be like a rebel doing well without kmusic shows lol. ”

AmaiHarmony brought the issue of money into the convo by posting, “Urgh, KBS is being stupid as usual… the money you’ll make with JYJ on music bank is probs 3 times whatever SM is offering you anyway.”

ZozKpopCrazy posted, “Bull[bleep]. KBS are just making excuses because they don’t want JYJ to perform or chart on XX Bank. @KBSWorldTV no wonder YG hates you.”

Yunhoshinki posted, “… we should not wonder why they are doing this to JYJ.  KBS is no good and they don’t deserve the best.”

arodcmarolf directly responded to KBS’s claim that JYJ being allowed on tv could somehow influence the outcome of the trial.  She wrote, “How is JYJ appearing on tv going to affect the outcome of the lawsuit?  KBS WHY ARE YOU SO STUPID”.

Maybe KBS is worried that JYJ will actually win the lawsuit and SM will blame them (KBS) for it?

andowi said, “I wish someday KBS or other who treats bad to our JYJ will beg and cry so hard to make ’em appear in their show.”  This sentiment is what I suspect will happen, but I won’t put anything past KBS.

Some fans are outright saying that JYJ doesn’t need KBS to be successful.

yinghuiDORA posted: “…Aiya suck [bleep] lah KBS, not like the boys need you…”

And tsukitsuki wrote: “Though KBS denies JYJ’s appearance again, but I don’t care!  JYJ no need to perform in mubank cause they’re TOO EXCLUSIVE!”

In the infamous Jeju Island incident a few months ago, Senator Kim Jae Yoon (reportedly from Jeju Island Parliament) publicly condemned KBS for itself decision to drop JYJ from the promotional concert regarding Jeju Island’s inclusion on the New 7 Wonders of the World list this summer.

The Senator said KBS didn’t have a clear criteria for their arbitrary decisions against JYJ and demanded KBS apologize to the fans.   Because of KBS’s actions, the government of Jeju Island was forced to make a public apology. (https://www.dongbanger.com/latest/jyj-senator-jaeyoon-kbs-apology-07212011/)

This is another example of KBS not having a clear reason for the continued rejection of JYJ.  It also has the added effect of helping to solidifying JYJ’s fanbase as KBS makes unreasonable decisions one after another.

__TOO EXCLUSIVE__
I sometimes wonder if JYJ would have as many loyal fans if SM had decided to work with JYJ instead of trying to crush them.  I wonder if fans would be as organized and adamant as they are now if JYJ were allowed to actually promote their music on TV.

How many blogs would have been written rebuking SM, avex, KBS and the like if this total blackout of JYJ were handled differently?

How many public displays of support would JYJ have if they were not placed under such constantly pressuring situations?  How many bus and newspaper ads would fans have bought to let the public know what’s going on?

Would JYJ’s latest album have sold 300,000 copies in preorders alone if the purchase of the album was simply seen as buying great music, instead of also having the added benefit of being a protest vote against the South Korean entertainment industry’s treatment of the group?

KBS really can’t stop stepping on the proverbial rake and smacking itself in the face.  There is no good reason why KBS continues to keep JYJ off their shows and, as a result, slapping JYJ fans in the face.

The litigation between JYJ and SM involves TWO parties.  If KBS were being evenhanded in their expression of a ‘no litigation’ ban, then they would also ban SM related programming, SM related advertising, and SM artists from their shows as well.

The more the system tries to stomp these guys, the worse it seems to be for the industry whose doing the stomping.

__Excuses, Excuses__
If (When) JYJ wins a lawsuit against SM, will KBS apologize or come up with some other excuse to keep JYJ off the air?  WIll they claim JYJ has damaged Korea’s reputation by breaking free of the elders’ totalitarian command?

Will they say JYJ is a bad example of a Korean artist and keep them off the air when they put SM to shame?  Or will they get the hell out of the way and allow for a fair atmosphere for JYJ to compete?

These types of decisions make the South Korea entertainment industry look like a ridiculous, backwoods, master/slave setup where anybody who speaks out is blackballed.

And when KBS gets popped  – and I think they will if they continue this nonsense  – we may finally know what connection KBS has to SM in relation to this case.

In the future, I can only hope that JYJ remembers who supported them regardless of the consequences; which companies were placed in a bad position because of threats from SM; and which companies (like KBS) seem to be a personal extension of SM.