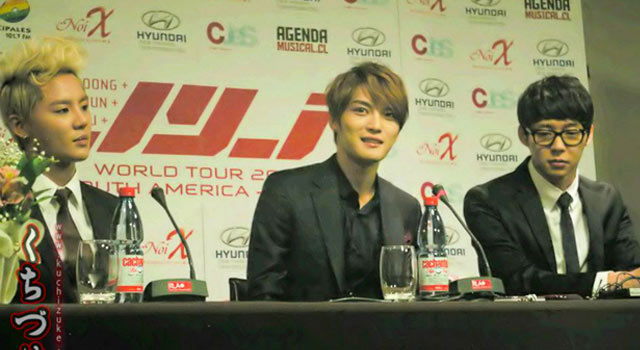 Members of JYJ officially responded to the ‘controversy’ over the sasaeng who have stalked, sexually harassed and previously put their lives in danger.

According to recent translated reports, during their Chilean press conference they were asked about this latest topic.

Junsu said these sasaeng have put GPS trackers on their cars to monitor them, broken into where they were staying and have even stolen their identities to get access to their private phone calls.

In addition, he mentioned instances of being sexually harassed by these people who feel like they have a right to “grope” and touch members without permission.

JYJ’s Kim Junsu even stated “they use our identification to expose our private phone calls and also place GPS trackers on our cars to monitor our every move. There were instances of breaking and entering where fans would take pictures of us while sleeping, try to kiss us, and steal our private items. Some fans even hired taxis to collide into our cars to see us in person.”

He continued to recount being sexually harassed and pleaded for a little decency from these people:

“Our lives began to fall apart as we would be groped, touched, and defiled every moment of the day. We, as humans, should at least be able to ask for a bare minimum standard of living, but instead we are forced to live in indescribable pain”.

Jaejoong issued an apology for their past behavior and said “We are sorry that we caused our fans to worry about us and that we forced them to share our pain.”

In the future, they say, they “will think about those who love” them and “will act more responsibly.”

He followed by saying “In the future we will think about those who love us whenever we are facing situations which are mentally difficult and will try to act more responsibly. Because of those who support us through the pain we go through, we will try not to break down again.”

He then finished with “For those fans who always cherish and support us on stage, I will do my best”.

Its unclear whether the public outside of South Korea knew their experiences were this terrible.

International fans remain shocked that there doesn’t seem to be any enforcement of laws to protect JYJ and other celebrities from this type of behavior.

It is also surprising that there doesn’t appear to be any recourse from being accused by sasaeng in retaliation for turning them in to the police.

Sasaeng are said to accuse a celebrity of something in retaliation, and then ask for “compensation” money, which has the effect of keeping many celebrities from reporting them to the police.

A Japanese friend of Jaejoong’s, Akio Iwama, posted about this issue at Twitter as well.  He often jokingly refers to Jaejoong as “Prince”.

According to translated reports, he appeared to be talking to JYJ’s fanbase and calling them “princesses”.

Iwama-san wrote, “Wise princesses, don’t panic. Else, we’ll be falling for the enemies’ ploy  It’s obvious as to who exactly is the criminal. The prince has endured it for so many years, yet he’s still singing with love, facing everyone with his brilliant smile, isn’t he? This is something few can manage. So~ let’s continue to support him as we’ve done so far~”

The Twitter-verse is lit up with responses to this, as many people say they understand Jaejoong’s frustration and that JYJ shouldn’t have apologized.

KpopAsian19 wrote, “WHY DID YOU APOLOGIZE JYJ?! IT ISN’T YOUR FAULT!!! Damn!! Stupid Stalkers fault making the guys apologizing for nothing *sigh*”

davidkotar wrote, “JYJ have done nothing wrong in my eyes.. it’s not right for them to apologize for defending [themselves]…”

9095keiko posted, “JYJ did nothing wrong in my eyes and JJ didnt need to say apology at all.”

immelissatan posted, “its not even their fault”

djariKush wrote, “Poor choonie, slapped at the face. F*cking sasaeng fans! I couldn’t blame JYJ for their action towards them. Those people are demented!”

GleeToJYJ posted, “reading akp comments. i wonder why abracadabra hates JYJ so much. maybe that person is a sasaeng, don’t u think so? LOL!”

bellaZulaikhaZ wrote, “Wow saeseng fans are scary as hell.. Stalking our boys everywhere they go? Don’t you have a life? Please stop it.. You’re hurting them!”

JYJ ism wrote, “Sasaengs aren’t fans at all. You don’t had to apologize. It’s not JYJs fault! := “

simplee_v posted, “THEY SHOULD NOT HAVE TO APOLOGIZE FOR THOSE LUNATICS!!”

luna paramita wrote, “@mjjeje Dear Jae, no matter what, you’ll always have us (the real Fans). Let’s bear it all together. Love u guys forever. JYJ Fighting!!”

linhda_ism wrote, “JYJ should not have apologized. The only thing that they should be sorry about is being sorry to those mental patients.”

haveyunaness posted, “You didn’t have to apologize because it wasn’t your fault from the beginning. #JYJ”

AppleRella wrote, “@6002theMicky no need to apologize , You did the right thing n I will always support JYJ!!!”

M_412_IA wrote, “not all people ask for forgiveness for being angry at their harraser n stalker. but JYJ personally apologizing in international public…”

tralalaiza posted, “imo JYJ doesn’t need to apologize. It’s those sasaeng fans fault for doing those things to them. Of course they’d explode.”

fathiah wrote, “I tell you what, JYJ deserve an APOLOGY from those SASENG CRIMINALS!!! those SASENGS will think they are innocent & keep doing it AGAIN!!”

JejeJYJ posted, “there is nothing to apologize….”

___djb___ wrote “It’s a shame that Korea does not acknowledge the need for better mental health support in their country.”

Cecilia9095 wrote, “@mjjeje For someone who unselfishly gives happiness to others and protects his dongsaengs, we fans will do our best too!”

Shi Wei posted, “I cannot imagine how JYJ/DBSK live their life for the past 8 yrs with crazy mindless stalkers stalking them every single day.”

xlodvnava posted, “My heart is breaking for JYJ.. And to all the idols and hallyu stars…. Being famous is not good in some ways. God bless them.”

Steve Hwang wrote, “I feel sorry for these uber-talented guys… they should be treated better.”

And it goes on and on and will probably continue tomorrow with people expressing their opinion on this subject.

No doubt what the Korean “yellow journalists” at Dispatch tried to do may have blown up in their faces.  This apparently is becoming a major issue not because of Jaejoong’s response to being harassed, but because of the illegal actions of the sasaeng who have caused multiple altercations.

In addition, the outrage is furthered because there doesn’t seem to be any enforcement of laws or recourse for the victims of these sasaeng.

These little assholes (sasaeng) are putting not only the lives of the celebrities at risk but also the lives of innocent people who may unfortunately find themselves in the way while sasaeng chase down a celebrity.

2 thoughts on “JYJ responds to sasaeng hot topic; Members were stalked and groped”