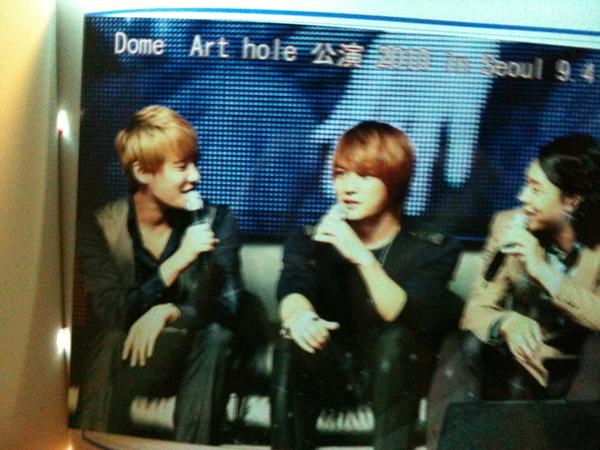 The Lotte PV was played to signal the start of the fan meeting.
Then the three walked on and performed ‘いつだって君に’ (Itsudatte Kimini)

Jaejoong gave out the ring that he was wearing on his left ring finger.
Oh why~~~

Just as he was handing the ring over to the fan, the MC asked ‘are you going to put it on her ring finger?’
and Jaejoong said something like ‘You’re being very sly~~’
Then I think he put it on her thumb

Receiving a gift from the hands of Jaejoong…
No matter what it is, (she) must be very happy…
As a Jaejoong fan, I’d really die to have it.. oh ring..

As a Jaejoong fan, compared to the things that you buy for yourself,
this is completely different, it’s something you can’t buy with money

This was followed by ‘Xiahtic’ and then ‘W’

Then JYJ gave out posters.
You couldn’t really choose which member to get your poster from,
but I was told that you could at first!! aish lies
Even though I was really uncomfortable and extremely nervous, I was completely ecstatic
JYJ stood in a line, waiting for us to walk over. It was like receiving a poster from one’s love.
—
Gifts. The three of them stood side by side. I could get one from my bias. I was standing in front of Yoochun but he didn’t notice me because he was watching the a crowd of people walk towards JaeSu. I said ‘Yoochun’ and then he said ‘Oh, sorry’ and handed me a poster.
—
The three of them stood together and I managed to get a poster from Jaejoong.
Coming all the way to Korea was really worth it. Jaejoong looked so beautiful up on screen, but even when I was standing in front of me, he didn’t have a rough kind of feeling.
—
I told Junsu that I would be attending the XIahzart concert next month and smiled at me. Although… the way Junsu kept standing there kind of made him look like he was receiving a punishment of some sort.